The author presents historical record of the era concerning published epigraphic texts as well as opinions on the genealogy of the last Thracian
kings.

The numismatic part of his work discusses the coin types of King Rhoemetalces, known so far to be two in number – in two nominal values struck only of bronze. He also considers a group of coins bearing iconographic features very close to the Rhoemetalces ones. However, because of the legends on the former they cannot be related definitely to him or other king under the name of Rhoemetalces.

The coin types and conclusions presented in the work have been grounded on explored single coins and hoards. 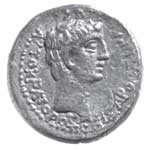