The present paper is focused on the remarkable coins depicting on the obverse two face-to-face busts, one of them being a God and the other one – Gordian III or Philip II. An analysis is offered, approaching in detail the temporal and spatial aspects of the issues, which results in asking substantial questions so far left without any attention by the specialists: Why these issues were firstly minted under emperor Gordian III and not earlier? Why these issues happened only in the territory of ancient Thrace which was divided between two different Roman provinces – Moesia inferior and Thracia, and nowhere else throughout the vast Empire? Were the three mints with respective coins for Gordian III issuing strictly simultaneously, or was one of the three an actual forerunner? If a forerunner really existed, who was it: was it Dionysopolis, or probably Marcianopolis, or Odessos? What was the factor which allowed (or made) Mesambria issue obverses with busts of Philip Junior as caesar depicted face-to-face with Sarapis/the Great God, despite being part of the province of Thracia, not of Lower Moesia? What was the common between the mints of Marcianopolis and Tomis which allowed (or made) them produce the obverses with busts of Philip Junior both caesar and caesar aug(ustus), face-to-face with Sarapis/ the Great God? How meaningful is the uniformity of the obverses of the five mints here under discussion? Should we approach this uniformity as just a formal fact, or we are allowed to search for its eventual economic and political aspects? Some of the answers are too speculative, others are not available at all and are still expecting future finds to provide the needed information. An earlier English version of this study is included in the volume “Ex nummis lux“. 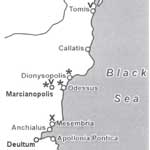