In 1980 twenty four bronze coins of towns in various provinces in Asia Minor entered the numismatic collection of the Museum of Archaeology in Sofia registered in the Inventory books as a hoard. There are not any data on their provenance. According to the only information available they were received as a donation from the Ministry of Foreign Affairs.

The coins of towns in Cilicia take the main part in the composition of the hoard coming mostly from its capital town of Tarsus (17 in number). Single coins represent some other towns in Cilicia – Olba, Celeuceia ad Calucadnum, and the colony of Ninica-Claudiopolis, as well as in other provinces in Asia Minor – Caesarea in Cappadocia, Perga in Pamphylia and Nicaea in Bithynia.

The earliest coin in the hoard is an autonomous piece of the town of Soli in Cilicia dating from 100 – 30 BC, and latest one was struck during the short reign of Emperor Tacitus (275-276).

With the exception of Nicaea’s pieces, the coins of towns in Cilicia, Pamphylia and Cappadocia distant from the Balkan territories of the Roman Empire are not at all characteristic of the coin circulation in Moesia and Thrace. Even less they are found here as hoards. Having in mind the great number of coins of Tarsus in the hoard composition, most probably it has been found in the vicinity of this town. It is well known that the provincial coins circulated in the area of the town they had been minted in as well as over the territory of the province this particular town was located.

In the days of Tacitus’ reign (275-276) almost all of the provincial mints ceased their activities. The only ones that continued striking coins were Perga in Pamphylia and Alexandria in Egypt.

The social and economical crisis that covered the Roman Empire in the second half of the 3rd c. lead to devaluation of the coins, rising prices, withdrawing the coins from the market and hiding them as treasures. The coins in the hoard here discussed are distinguished by their good preservation and high nominal values; they were concealed after AD 276 as a result of intentional deposit of quality pieces. As a reason for hiding the hoard we can point out to the disarray in Tarsus as well as all over the Empire after Florianus’ death, who succeeded Tacitus for several months, happening in the same town. 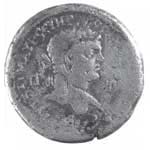