The coin – subject of the work here presented – was found by a private person in 2016 and right away entered the collection of NHM – Shumen. It came from the landfills in the area of Shumen Fortress accumulated in the course of the archaeological excavations which lasted until 1990s.

The coin is struck in silver, flat, measuring 19/ 20 mm in diameter and 1,26 g in weight. A fragment has been broken from its periphery about ¼ of its blank.

The emission is definitely Byzantine in style; however, the inquiry in the numismatic bibliography did not show the existence of such a coin type. Although the coin is fragmented, the representations on it are clear enough for to make an attempt to identify it. The legend surviving right of Theotokos also helps relating it categorically to a Palaiologan emission. Who is the emperor from the Palaiologan Dynasty we can associate this coin with?

As a matter of fact, the problem with the piece in question comes with its flat design similar to the basilikons but not displaying their iconographic features; on the other hand, the legend right of Theotokos characterizes it as an emission of Michael VIII Palaiologos who did not mint flat coins but only silver scyphati.

The numismatic collection of the Hermitage houses a unique silver flat coin which is an exception of the scyphate coinage peculiar of the age of Emperor Michael VIII Palaiologos. Its obverse bears a representation of Jesus Christ enthroned, and its reverse – a standing figure of the Emperor holding labarum and akakia, and also a legend with his name and title: ΧΜ ΔΕCΠΟΤΗC Ο ΠΑΛΕΟΛΟΓΟC. In contrast to the other silver coins which are scyphati, this one is flat and smaller in size – 19 mm. As its weight is lower compared to the basilikons coming close to scyphati (2,80 g) an opinion has been accepted that it represents a transition type minted at the end of Michael VIII Palaiologos’ reign. Its emission aimed to escape the scyphate form already imposed and to revive the flat design while keeping the same weight (Grierson 1999, 113).

The above parallel is the other real opportunity for Shumen coin – to belong to the silver emission of Emperor Michael VIII Palaiologos from the mentioned transition coinage. The grounds for this assumption lie on the bust representation of Jesus Christ characteristic of the emissions of this emperor as well as the vertically arranged legend also peculiar of them. Only the right half of the legend on our coin has survived and still it seems enough to identify it as an emission of Emperor Michael VIII Palaiologos. Most probably to the left it should be read: ΧΜ ΔΕCΠ (ΟΤΗC). The new silver Palaiologan coin here discussed comes as a further addition to the varied and yet unknown coinage of this last Byzantine dynasty. 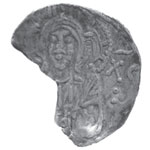