Venetian and Dubrovnik coins (13th – 18th c.) from the depot of Museum of History – Provadia

Although not discovered during regular archaeological excavations, the coins here presented are a valuable source of history of Provadia region. They have been brought over the years by different people and from different places. Thanks to them we can trace, albeit sporadically, the kinds of Venetian and Dubrovnik emissions circulating in the region in the course of a long chronological period of the power of the Bulgarian state from the 13th – to the mid 18th c., when Bulgaria was already three centuries under Ottoman rule. It is well known that during the Ottoman domination there was a Dubrovnik colony in Provadia trading with the lands beyond the Danube. Sure merchants have paid with Dubrovnik and Venetian coins.

The future archaeological research in Provadia region as well as the publication of new numismatic material will add extra clarity about the circulation of various Venetian and Dubrovnik coins in this geographical area and over the Bulgarian territories in general. 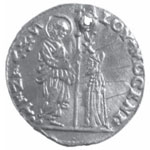