Newly found inscriptions and drawings from the cave of St. John of Rila near Garbino village, Kyustendil region

The rock monastery near Garbino village, Kyustendil region, known as the cave of St. John of Rila drew the attention of scholars early in the 20th c. The interest is associated with the study of data from some lives, local legends and the worship of the cave as a holy place dedicated to St. John of Rila. The interest was not interrupted and was continued at a later time with the discovery of an inscription and drawings on the floor level of the rock niche. The work here presented takes into account the earlier academic publications reviewing and supplementing the text of the inscription mentioned above. According to the reading here proposed, the inscription is as follows: ст‚Ľ §‚ць ·‚wвань да с[п] || асΈ васΈла || § ада. The paleographic peculiarities of the characters give grounds to suggest that the inscription was written about the 16th c. The drawings close to it have not been presented in the work having in mind their joint publication by the researchers.

The work aims at introducing two newly found inscriptions from the cave and three new drawings explored in the early spring of 2017. Both inscriptions read:

Newly discovered drawings in the rock niche represent a warrior on horseback, a horseman and an anthropomorphic figure. The inscriptions from the cave mention the name of St. Father Yovan (Йован). The comparisons with inscriptions on murals in churches in the vicinity and lives show that the saint mentioned in the inscriptions can be identified with St. John of Rila. The author presents also a reference for the form of the name of Yovan found in some acts from Mount Athos which also points to the time the inscriptions were written. The veneration of the cave through the ages to this day as the cave of St. John of Rila as well as the local legends about his life in the rock monastery reveal the strong tradition and the memory that the holy place bears for the name of the great Bulgarian saint. The newly found inscriptions are proof of this. 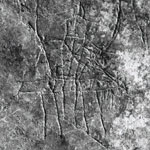