In 2017 a hoard containing 67 provincial Roman coins entered the Numismatic depot of the National Museum of Archaeology in Sofia. They were found during agricultural activities on the land of Staro Selo, Sliven region. The earliest coins in the composition of the hoard come from the time of Emperor Septimius Severus (193 – 211) struck in several mint yards under the name of the Provincial Legatus L. Aurelius Gallus (202 – 205), and the latest in date pieces were issued under the reign of Philip the Arab (244 – 249). The emissions of both large mints in Moesia Inferior prevail – Marcianopolis and Nicopolis ad Istrum participating with almost the same number of coins and forming almost 3/4 of its composition – 53 pieces in total. This fact gives the grounds to assume that the hoard was accumulated in the territories north of Haemus and probably in extreme circumstances transferred to Province of Thrace in the mid 3rd c. Almost the same number of coins of Marcianopolis and Nicopolis ad Istrum is an indication that most probably the hoard was accumulated in the region located between the mentioned large towns.
Initially the coins were in a good condition but at a certain moment after they were buried all of them were burning as some of the coins have been affected to varying degrees. During the Barbarian invasions in the mid 3rd c. the eastern areas of the Province of Thrace suffered the hardest hit and most probably the concealment of the hoard from Staro Selo was associated with the severe raid of the Goths in 250 – 251, without excluding the possibility of a later date of depositing. 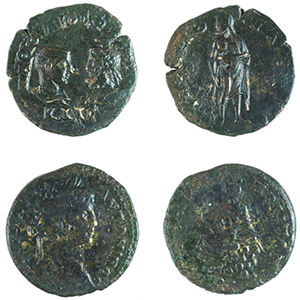