The work presents two copper coins of quite curious iconography and general date from ca. late 14th c. The first coin has a thick blank struck and stamped together with a matrix, with a hollow cylindrical body and sharp edges. One of its sides displays a vertical monogram with the name and title of the Tsar known from the copper coins of the Bulgarian Tsars Johan Alexander (1331 – 1371) with his reign in the capital city of Tarnovo and of Ivan Sratsimir with residence in Vidin. The other side bears a royal figure with a large head, a low stemma with propenduli and a body similar to pentagram, depicted in a peculiarly naïve way, with thick engraving strokes. For a prototype of this imitative coin they have taken several emissions of copper coins with flat blanks belonging to Tsar Johan Alexander struck in some provincial mints with a general location near the regions along the seashore and Eastern Dobrudzha, between Varna and Drastar (Silistra) in the period of 1360 – 1370.
The second coin also shows the distinctive features of an imitative issue but in connection with the copper coins of Tsar Ivan Sratsimir struck in the region of Vidin. Its blank is thin, rectangular in shape. One of its sides displays a standing figure of an angel with wings spread, probably Archangel Michael, holding a three-point scepter with a short handle in his right hand, and in his left hand – a small globe. Below, to the right next to his feet - a monogram of the letters АР (АРХАNГЕЛЪ). The figure is depicted with a thin engraving stroke and a deviation from the liturgical Orthodox model. In a rather naïve and rude way, also with a thin engraving, the reverse side bears the representation of Christ with a nimbus, tunic and mantle, sitting on a throne without a back, his two hands raised for blessing. The availability of copper coins of Tsar Ivan Sratsimir of original and imitative origins in the Vidin region, dating from ca. 1380 to 1390 indirectly determines the location and date of such issues of copper imitation coins.
The presence of copper original and imitation coins struck in various official and private mints and workshops in the regions of Northern Bulgaria from Vidin and Tarnovo to Drastar and Varna produces valuable data on a differentiation of a common coin circulation in the Vidin and Tarnovo Kingdoms, notwithstanding the great territorial losses and economic hardships from 1370 on, as a result of the continuing Ottoman and Tatar invasions. 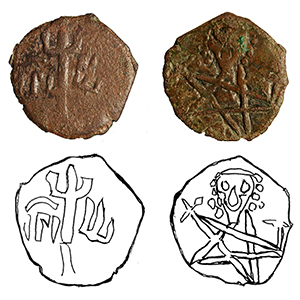