The medieval silver coins from Dobrudzha area represent a very significant section of the Bulgarian medieval numismatics. Undoubtedly the most interesting are the countermarked silver coins. Hoards containing such coins appear along the Black Sea coast, next to the Danube Delta commercial centres. Some researchers refer to this as a Dobrudzha coinage, although the Groshen come from Serbia and a small number – from Bosnia, Byzantium and Bulgaria. The Bulgarian specialized literature defines four types of countermarks relating to the Dobrudzha rulers although without clear evidences. The attention of the researchers is mainly drawn by a countermark with the letter “τ”, which in Bulgarian numismatic literature is regarded as the initial of Dobrotitsa, written in Greek (Τομπρότίζα). It is remarkable that many years of scholarly attempts to analyze the countermarked coins remain inconclusive. If we only for a moment abstract ourselves from this vision and look for other factors of the age, it immediately stands out the permanent presence of the Golden Horde in the region. Their countermarking can be determined as an adjasment as valid means of payment of a regime demonstrating its authority. The presence of Groshen displaying a couple of countermarks, as well as images used do not confirm the thesis of their belonging to a ruler of Dobrudzha. I have to note that the hypothesis proposed here for the Dobrudzha countermarks coincides very well with the existing view of the Tatarian influence on the copper editions of Terter (1370 – 1390). However, there is one major problem - the symbols used are unknown in the numismatics of eastern coinages. Many years ago, Romanian scholar P. Diaconu suggested that the additional marking of the images on the coins refers to the activities of one of the rulers of Wallachia, most probably Mircho Stari (1386 – 1418). The crescent and the star are the symbols of the ruler’s seal, with which he stamps his charters and is present in the coinages of most Wallachian-Moldovan rulers. The new hypothesis presented here, based on the opinion of P. Diaconou, can classify the emissions of Terter as being issued under conditions of Wallachian dependence. 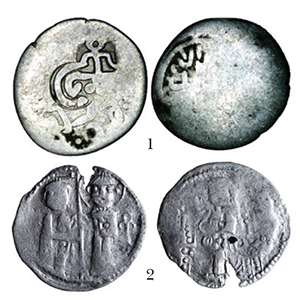